I have never created a curated collection of clothes before. All the dresses and other garments I’ve sewn in the past were stand alone pieces either inspired by a the fabric itself or, an original character of mine I wished to bring to life through clothes. The idea of designing an entire look without knowing what fabric I intend to use sounded terrifying – limitless. Being restricted by the fabric I thrifted from the thrift store gave me boundaries; I only had so much of the mysterious material and couldn’t replenish it if I messed up or need more. This, in a way, forced me to sit down and think of the best use of the fabric – the design would cater to the fabric, not the other way around. These limitations grounded what I was doing – using basically magic to turn seemingly nothing into an astonishing garment – and made me feel safe.

Allowing myself to dream, even if only for a moment before pen meets paper and designs are drafted, is scary. I thrift majority of my material not just because it’s somewhat more environmentally friendly then buying off of the bolt, but out of the necessity to keep cost low. Fabric is normally priced by the yard (and based on a quick google search, the good stuff generally cost ~$15 to $50, not that I would know) which can get pricy quickly. By only designing for what I have, I avoid agitating my bank account and any anxiety that accompanies thinking about personal finances.

But I enrolled in ART-460 with the intention of honing my sewing enthusiasm and entertaining the idea of opening my own online boutique post graduation. This is something all my peers, friend, and family – even strangers who’ve seen my pasts creations – have encouraged me towards. I apparently have the talent, but I know I lack the self-confidence. Coming from a low-income background, financial security has always been the goal and, starting a small business where I’m solely responsible for my income through the selling of something I’ve created – does not sound like the most secure option to me. So I’ve always restricted myself to a perceived sense of practicality dictated to me by society. But the notion of becoming an adult who does something she doesn’t love, not even like, is the proverbial pea beneath my mattress. Practicality might be safe and comfortable, but I want to give my dreams a try. So, during my finally semester of being sheltered by academia, I’m going to dream big … -ish. And the first step to that is creating a mood board, unbridled by the reality of how I’ll afford anything pictured in it, to guide my collection.

Before searching for images for my mood board, I thought of possible themes I could be inspired by. After surveying my interest, I knew I wanted to do something centered on Black women in Cottagecore.

Cottagecore, an aesthetic popularized on TikTok during the start of the COVID-19 pandemic, embraces the idea of escaping contemporary/urban issues into the idealization of horticulture, animal husbandry, and other practices associated with living off the land (i.e. baking, sewing, etc). Unlike subcultures (i.e. Punk Rock during the 70s) or countercultures (i.e. hippies doing the 60s) that are considered lifestyles, cottagecore has been deemed by some as an aesthetic or more specifically – an internet aesthetic. Video essayist Rowan Ellis, defines an internet aesthetic as “a visual-heavy concept that is grouped around a consistent theme, repeated imagery, and particular color palette – and might show up in things like fashion choices, Tumblr photo sets, Pinterest boards, or even offline activities and pastimes, which are then recorded and displayed back online” (Ellis 2020). On Tiktok, beneath the hashtag “cottagecore” which has garnered 8.9 billion views, videos of mostly thin white women frolicking through nature in billowy light weight, light colored fabric can be seen. Although the first black woman isn’t seen until the 31st post, black women and fem presenting people aren’t absent from the trending aesthetic, rather their visibility is suppressed. A glance at the specified hashtag “blackcottagecore“, which has 10.8 million views, features plenty of black women/fem presenting people engaging with the aesthetic, but Tiktok’s algorithm actively redirects viewers’ attention to traditional European standards of beauty and femininity (i.e. proximity to whiteness, thinness, etc).

The exclusion of black women from mainstream spaces of cottagecore, or more broadly the movie and literary genre of fantasy, to me seems reminiscent of the exclusion and erasure of black women from femininity due to our race. Sitting at an intersection, black women are first perceived for their race and then their gender unlike their white counterparts. In our racially charged society, especially within the United States, our blackness obscures our womanhood and often excuses the unfair and cruel treatment we receive because of the dehumanization of black people as a whole. Unlike white women we are thought to be innocent and in need of protection, black women aren’t afforded that privilege. These presumption have real world consequences, too. This is exemplified with Missing White Woman Syndrome – a term used by social scientist in reference to the disproportionate media coverage of missing persons cases involving young white middle class women versus non-white women even though people of color go missing at a higher rate. Read this New York Times article for more detail. I also recommend the video essay Gender Performativity and the Surveillance of Womanhood by Shanspeare for more context on the evolution of femininity, its performance, and who’s allowed to participate in it.

With all of this in mind, I knew I wanted to use the soft, feminine, dreamlike feelings associated with cottagecore through its use of floral motifs, lightweight/billowy fabrics, and nature/pastel inspired color palettes to highlight the femininity of black women.

For my mood board, I saved images from Instagram that I felt invoked my message. Surveying the finished image for common themes, I found an abundance of sheer (i.e. organza, chiffon or tulle) or lightweight (i.e. cotton, linen or statin). Ribbons, bows, floral appliqués, puffy/bishop sleeves and ruffles/pleats also frequently reoccured. As for colors, whites, blues, and yellows with an accent of red, pinks and oranges appeared the most. When designing outfits, I will keep all of these things in mind. 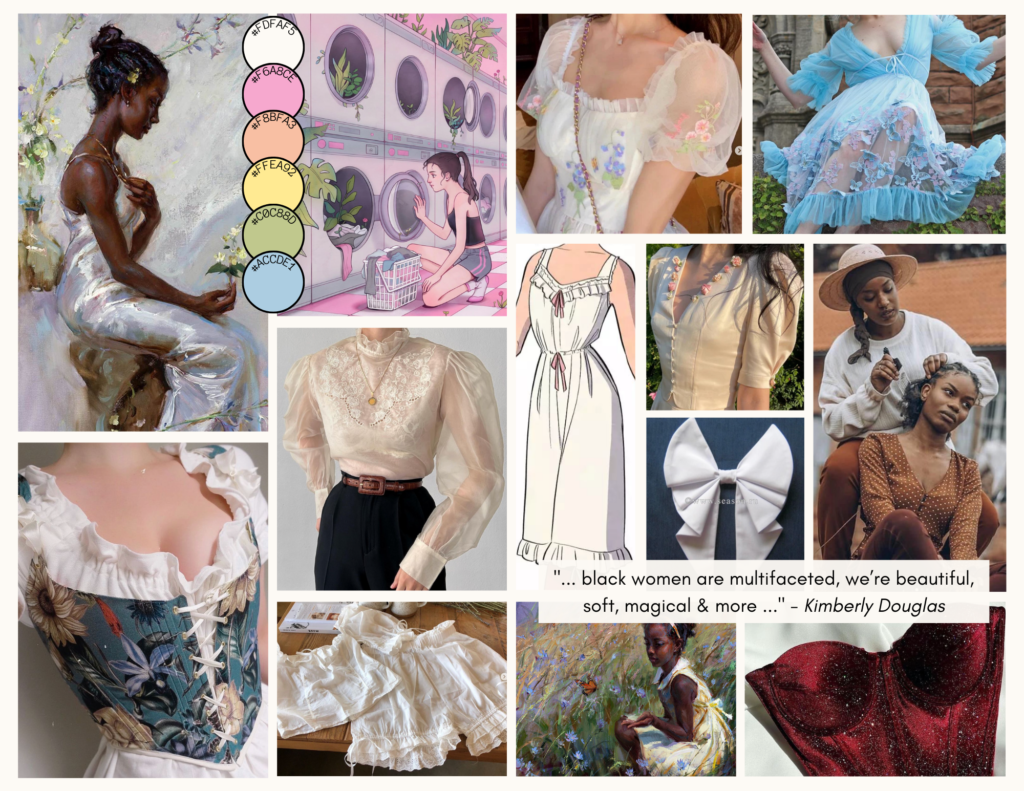 Although I have made pattern blocks before, I wanted to walk myself through the process again in preparation for making pattern blocks for other people for the first time. A large component of creating properly fitted pattern blocks are accurate measurements. Here are notes I took on measuring yourself and others from Kim Daves and Danielle McAllister YouTube videos:

This is a montage of me remaking my bodice block and its mock-up with consideration to the critiques I had with the one I made the previous night. Now in my studio versus my bedroom, I also familiarized myself with a Singer sewing machine (I use a Brother at home) by reading the manual, watching how-to videos, and hands on experience.

With my mood board in mind, I sat down for a couple of hours and sketched out 5 designs to consider for the final 3 – 5 looks. I did this on my iPad using an Apple Pencil on the application procreate.

Throughout these designs, I decided to use arm cuffs synched by ribbons, sheer puffy/bishop sleeves, and pleated high collars or trims to unify the different looks. 2/5 of the looks feature floor length skirts, another 2/5 just above or below the knee, and 1/5 has a mini skirt.

Beneath these finished outlines, speed drawings of four of the looks can be found.

After receiving a critique of no critique from my classmate and professors due to ineffective communication on my part, I returned to the finished outlines and colored them with consideration to the different opacities and layering of each outfit in attempt to make my vision clearer. I also took color selections of my models’ and I’s skin tones to help envision how these color would appear on our skin although , these colors aren’t solidified and may be thought of as placeholders.

It was recommended I make paper dolls the color and proportion of my models and drape actually pieces of fabrics along the to get a better sense of what I’m doing and what the real finished garments might look like. In addition to considering that, I will also practice some of the techniques required of these looks on a smaller scale to familiarize myself and see if my vision and reality actually match up or if I need to go back to the drawing board.